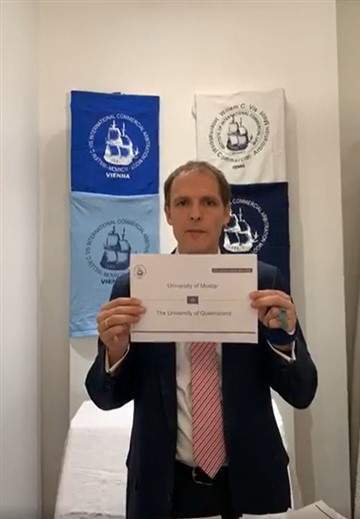 Students from the Faculty of Law of the University of Mostar were ranked among the 64 most successful teams in this year's 27th Willem C. Vis International Commercial Arbitration Moot competition, which is one of the most prestigious law student competitions in the world.

Due to the global Covid-19 pandemic, this year's competition was held virtually for the first time from 4 to 9 April 2020, instead of the traditional venue in Vienna. Law students Doris Popović, Viktor Kolobara, Karlo Musa and Petar Čarapina as their coach represented the University of Mostar team, with the great support of members of last year's team and academic coaches.

The aforementioned success was preceded by an active seven-month preparation, which included writing pleadings and oral representation before arbitral tribunals in English, and students also participated in a training organized by CLDP. At the Virtual Middle East Pre-Moot, the University of Mostar team went through the elimination rounds of the competition, won the final fifth place, and our student Viktor Kolobar was awarded the honourable mention award for the best speaker at this pre-competition.

The oral part of the main Vis Moot competition was attended by 248 teams from all over the world. The University of Mostar team successfully crossed the threshold of general rounds by a successful legal argument and oral presentation of commercial dispute settlement, making a historic result for our Faculty of Law.

Loading...
Meeting of the HERE group held at the University of Mostar

The University of Mostar hosted a two-day meeting of a group of Higher Education Reform Experts in Bosnia and Herzegovina. The topic of the meetings was the analysis of...

Despite the Pandemic, the 5th Edition of the PR & Media Days Mostariensis Conference is Opened

"All important names from the field of communications, management, marketing, media and other scientific disciplines participate in the work of the conference. We have ...

Rector Tomić: We are Developing a Modern European and World University

During a recent visit to the University of Mostar, Minister of Foreign and European Affairs of the Republic of Croatia Gordan Grlić Radman, PhD, said that he wa...